In the fall of 1970 The Board of Higher Education (BHE) accelerated its plan by five years to implement a policy of Open Admissions at the City University of New York. In response to spring 1969 student mass rallies and confrontations over several months that culminated in student strikes and building occupations, Open Admissions allowed any New York City high school graduate to attend a CUNY college. [See collection: "Radicalism at BMCC: the Early Years."]

The demographic impact of CUNY’s new Open Admissions policy was immediate: in Fall 1970 the entering class was 75 percent larger than the previous year’s; one year later Black and Puerto Rican student enrollment in CUNY’s senior colleges increased to 24 percent of the total as contrasted to half that number a year earlier. White, working-class students, many of them of Italian and Irish descent also benefitted from CUNY’s new Open Admissions policy. By 1975, CUNY had created a more racially and ethnically diverse pool of 253,000 matriculating undergraduates (a 55 percent increase in total enrollment since 1969). While 78 percent of first-year students entering CUNY in 1969 had been white, by 1975, that percentage was now 30. CUNY had also agreed to the development of a series of ethnic and Black Studies programs and centers at its campuses, which contributed to the evolution of more diverse university curricula nationally. CUNY had thus put itself at the forefront of national efforts to make tuition-free public college education available to any high school graduate. (Listen to panelists from the April 9, 2014 Saving CUNY's Past event.)

Despite these demonstrated successes, opposition to Open Admissions took many forms. They ranged from traditional CUNY faculty  lamenting Open Admissions while nostalgically recalling CCNY’s “high standards” and reputation as the “poor man’s Harvard,” to conservative politicians and business leaders in New York and across the country, opposing expanded use of public funds. These conservative voices were soon amplified by breakdowns in the implementation of the Open Admissions system, ruptures that could be traced to the persistent inadequacy of state and city funding that would have allowed CUNY to meet the educational needs of a newer, much larger, and academically challenged student body.

The Board of Higher Education’s accelerated Open Admissions timetable proved chaotic during the first years, with long registration lines, closed courses, insufficient classroom seats, and a scarcity of textbooks. In addition to a frenetic building program requiring substantial capital funds, the CUNY administration needed to secure operating funds to expand its faculty. CUNY administrators, despite many challenges of launching the Open Admissions experiment five years ahead of schedule, hired thousands of new, young faculty members who helped revitalize CUNY’s teaching force. [See the LaGuardia Community College collection that details some of the innovative programs the young faculty members launched.]

Despite substantial and immediate challenges, Open Admissions was a triumph. It transformed CUNY into the most open and perhaps most envied public higher education system in the country in the early 1970s. (See link to website on SEEK and Open Admissions.)

However, CUNY continued to suffer enormous constraints and deficits, both instructional and budgetary, throughout the 1970s. One byproduct of this underfunding was that two-thirds of the students entering CUNY in the early 1970s were leaving the system within four years of admission without graduating. Faculty workloads varied widely among CUNY campuses and the number of adjunct faculty hired across the system also increased dramatically. By 1974, adjunct faculty comprised one in three of the teachers at CUNY, especially at the newer four-year and community colleges.

Also at this time, the two faculty and staff higher education unions merged. The Legislative Caucus and the United Federation of College Teachers, after a sometimes contentious relationship, joined to become the Professional Staff Congress-CUNY. (See: 25 Years of Progeress: Professional Staff Congress/CUNY.) Even more contentious were the initial contracts negotiated between the PSC/CUNY and the CUNY administrations in 1972 and 1976, amidst the city's major fiscal crisis.

These fault lines and tensions inside of CUNY intensified as city, state, and national budgets were ever more constrained. Rockefeller continued his quest for CUNY to impose tuition charges on undergraduates as he had required at SUNY. While the BHE held firm on the municipal colleges’ commitment to its no-tuition policy for full-time, matriculating students, Mayor Lindsay, worrying about the city’s dire finances at the end of 1971, tried to offload CUNY’s operating expenses onto the state. (Hear interview with Mayor Lindsay about John Jay College of Criminal Justice in which he also discusses Open Admissions and the state budget.)

For three decades following the end of World War II, the city had supported an extraordinary expansion of its public institutions—including municipal hospitals, housing, schools, and colleges—all staffed by a highly-unionized and relatively well-paid municipal workforce. But the world-wide economic crisis that began in fall 1973 soon wreaked havoc on the U.S. economy, which in 1974-75 entered the worst downturn since the Great Depression. At CUNY, in 1974, a group of radical newly-hired junior faculty members formed an ad hoc group called the Newt Davidson Collective to provide a Marxist critique and analysis of CUNY. They produced a popular 66-page booklet, Crisis at CUNY that was even used by their colleagues in many CUNY college classrooms.

Abe Beame, who replaced John Lindsay as mayor in 1974, was unable to solve the city’s budgetary woes. Failed appeals were made to the big banks and the federal government for financial help. By June 1975, the New York state legislature finally agreed to surrender the city’s financial independence to an Emergency Financial Control Board (EFCB), in part managed by the banking industry. Major layoffs of municipal workers were ordered and the city cut CUNY’s budget in the summer of 1975 by tens of millions of dollars, yet the BHE still refused to impose tuition on CUNY’s students.

As the deficit grew larger in early 1976, New York State Governor Hugh Carey finally stepped in, setting up the Municipal Assistance Corporation to sell new city bonds in exchange for drastic cuts in city spending.  The mayor announced massive layoffs, targeting many of the city’s innovative social experiments. The CUNY system and its 130-year old free tuition policy were especially vulnerable. In June 1976, with CUNY’s budget in tatters, the Board of Higher Education broke down and imposed tuition on CUNY students in exchange for a total state takeover of four-year college finances (the community colleges would still largely be carried on New York City’s budget). Radical professors at Borough of Manhattan Community College were some of those who urged their union to take a more militant stance. (See "MCC Strike Committee Bulletin #1") and "Faculty Action" newspaper urging members to reject the contract.)

The state finally accepted the city’s argument that CUNY should receive state financial support comparable to SUNY’s.  Despite the state takeover, all capital construction at CUNY was halted and almost 5,000 faculty and staff members were laid off, albeit temporarily. While Open Admissions at CUNY remained in place, the decision to charge tuition and tighten admissions standards at the senior colleges, dramatically eroded the underpinnings of a truly Open Admissions policy.

This digital exhibition celebrates the 50th Anniversary of John Jay College of Criminal Justice. "From its evolution as a small school serving New York’s uniformed services, John Jay has grown to an internationally renowned liberal arts [...]

The 1976 contract negotiations between the Professional Staff Congress (PSC) and the university occurred in the midst of the city's mid-1970s fiscal crisis. Radicals at Borough of Manhattan Community College (BMCC) formed a strike committee in [...]

Sample Pittman was an Associate Dean of Students at Borough of Manhattan Community College (BMCC) during the early 1970s. He became known to politicized students and faculty as a hostile opponent of the Third World Coalition, the radical group that [...]

This is an early newsletter from the Professional Staff Congress chapter at Borough of Manhattan Community College (BMCC). Dated February 24, 1974, the newsletter features an article attacking BMCC president Edgar Draper for using the school's [...]

This handbook, a precursor to today's "disorientation" guides, offered incoming students a view of life at BMCC from the perspective of radicals in organizations that included the New University Conference, Third World Coalition, Night Students [...]

Joe Shenker, founding president of LaGuardia with the first group of students who were paraprofessionals

In 1970, Joseph Shenker was appointed president of what was then still called "Community College Number Nine," which would soon become LaGuardia Community College. Still in his twenties, Shenker brought a youthful optimism and a spirit of [...]

This issue of Prometheus, BMCC's student newspaper, was the first published after the Third World Coalition assumed control of the student government; it leads with a story on the appointment of Edgar Draper as president of the [...]

This issue of the Tiger Paper explores the effects of financial aid reductions alongside CUNY's "Open Admission" policy, details class registration troubles at BMCC, and advocates for the boycott of "scab products."The Tiger Paper, which [...]

Prism was the Borough of Manhattan Community College's annual yearbook. This 35 page chapter from the 1971 edition details the student strike that, in May 1970, temporarily shut down the college and resulted in 58 arrests. Filled with photos, [...] 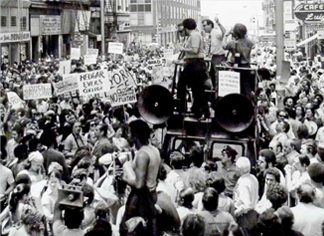