SLAM! was a multiracial, radical student activist group at several CUNY campuses from 1996 to 2004. It was strongest at Hunter College, where it served in student government during that time. SLAM! organized students against tuition hikes and budget cuts, for access to the university, immigrants' rights, childcare access, ethnic studies, the right of welfare recipients to attend college, and also participated in city-wide planning of mobilizations against police brutality and mass imprisonment. SLAM! also helped organize national mobilizations against war and the harms of global capitalism, as part of the global justice movement.

Go to all 25 Items in collection.

In this issue of the BMCC student newspaper, Voice of the Voiceless, the topic of Open Admissions is given full focus with more than twenty articles contributed on the subject from students across the CUNY system. The topic was given special [...]

"Students Rally Against the Cuts"

This front page article in the Hunter College Envoy covers a march and rally organized by SLAM! on March 21, 1996 against that year's proposed budget cuts to CUNY. The paper estimates about 800 Hunter students, faculty and staff attended.

This article in the Spheric newspaper from Hunter College investigates the potential exploitation of students and campuses by the proposed CUNY Card. Citibank would get fees from students as part of this proposed ID card that would also be an ATM [...]

This article by SLAM! member Sandra Barros for the Hunter Envoy investigates the role of CUNY Board of Trustees Vice Chair Herman Badillo in the plan to end open admissions at CUNY. This issue of the Envoy also includes an article about Hunter's [...]

This business card was created to promote SLAM! and make sure people had the phone number and address. It featured a well-designed colorful graphic, a Frederick Douglass quote, and a tagline sharing SLAM!'s mission, "To serve the [...]

York College Director of Security Winston A. Burrows' resignation letter explains that he is resigning after 17 years of service at York because he cannot become a party to the City University Director of Public Safety's plan to deny [...]

This 5-page brochure includes a brief overview of SLAM's history up to the 1999-2000 school year, SLAM!'s 10-point program, and details on three campaigns SLAM! was organizing that year: the High School Organizing Committee, which worked [...]

A multimedia oral history archive about the Student Liberation Action Movement (SLAM!, 1996-2007) and the CUNY Coalition (1995) at the City University of New York.

Go to all 25 Items in collection. 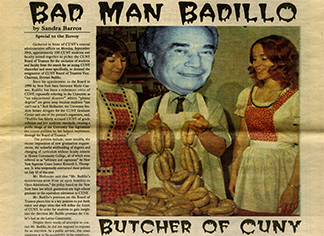