The CDLA’s #CutCOVIDNotCUNY collection offers a way of engaging what Donna Haraway terms “staying with the trouble,” of the potential and actualized austerity measures introduced by the CUNY administration at the outset of the pandemic, the intended pathways forward developed by the university and the state, as well as university-wide resistance to such actions. Documenting this moment in CUNY’s history establishes the collective memory of what transpired and allows for considerations of ways forward that take into account both the harried measures implemented and attempted by university and state administrations and the relentless pushback by the CUNY community. This collection can serve to inform, animate, and mobilize the CUNY community, to remind ourselves of the pushback against austerity policies and techno-solutionism in a moment of catastrophic realignment.

In May of 2020, the state and city budget cuts for CUNY were projected as high as $115 million, about 20% of CUNY’s expected budget prior to the pandemic. In this moment, the CUNY administration was keen to dismiss the contingent workforce by the thousands. Reported plans by John Jay College and the College of Staten Island, for example, spoke of the dismissal of 40 percent and 35 percent respectively of their adjunct workforces—some of whom would then consequently be left without health insurance during the largest global health crisis in a century. In swift response to the treatment of its workers at John Jay, seemingly instigated by a memo from Provost Yi Li, CUNY Rank and File activists mobilized against austerity, utilizing Twitter under the username #CUNYstrikeready Rank and File Action to connect with the broader CUNY community through town halls, writing an “Open Letter of Commitment to Resist Cuts at CUNY” signed by faculty CUNY-wide, and establishing a community and public facing presence against racist austerity measures.

Twitter was an important platform for the CUNY community to push against these measures, share personal perspectives, experiences, articles, and resources, and connect with others; and, accordingly, this collection documents various tweets from our community in this moment. Through the hashtag #CutCOVIDNotCUNY, GC PhD candidate and Brooklyn College instructor Mikey Elster used Twitter to draw attention to the important consideration that “the same workers on the front line of fighting the epidemic are our students.” And, the Brooklyn College PSC chapter identified the double-standard of expectations: that CUNY workers are being cut from employment while simultaneously being asked to offer uncompensated labor to the state:

“#CUNY + #SUNY faculty and staff are being asked to donate 15-20 hrs interviewing applicants for NYS Contact Tracing initiative. Vital work for the state's public health, but @NYGovCuomo will you also ensure these higher ed folks have thriving colleges in Fall? #CutCovidNotCUNY.” 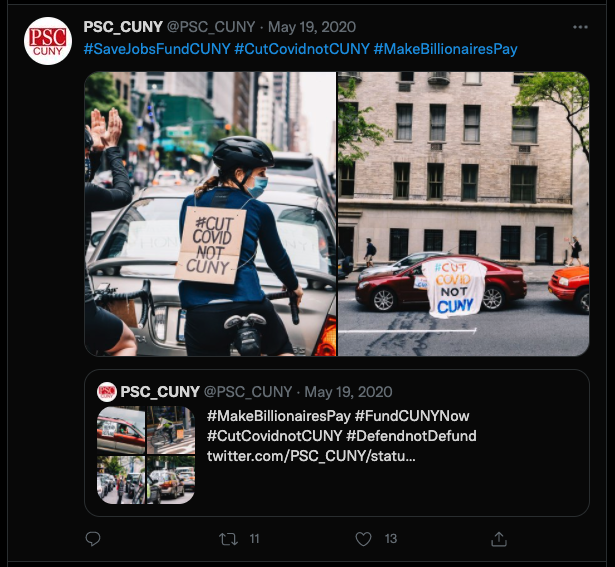 Notably early on in planning for the 2020-21 academic year,  Brooklyn College mandated that its departments and programs increase class sizes while simultaneously lopping off 25 percent of their course offerings. Yet, in an article for the Gotham Gazette well circulated in the CUNY Twitterverse, Professor Matt Brim of the College of Staten Island explained that such measures are not new to CUNY, stating that the university “has been in a slow-burn, decades-long state of crisis…[and that] the COVID-19 pandemic reveals with new urgency...CUNY’s longstanding, systemic failures.” And, as GC Fellow and City College instructor Harry Blain pointed out on the platform, community colleges and minority-serving institutions such as Medgar Evers College are particularly feeling the brunt:

“@CUNY cuts fall most viciously on community colleges like @bcc_pres and @bmcc_cuny, as well as senior colleges like @NewsatMedgar that serve low-income communities.”

Such harmful preemptive measures sparked protests across both the city and social media, illustrated in tweets by the PSC and others (which included the particularly striking photography by artist Erik McGregor) that address the May Day caravan for adjunct rights, and through the hashtags #CutCovidNotCUNY and #makebillionairespay, among others. Physically at the protests (New York State Senator John C. Liu), on Twitter and online (including Congressmember Alexandria Ocasio Cortez) a number of federal, state, and local government officials and public advocates showed their support for funding CUNY despite plans by Governor Cuomo and university administration. Support for resistance to austerity measures at CUNY and those observed more broadly across the US, and considerations of the taxation of the wealthy as a viable way forward, were made by both local politicians and CUNY faculty. 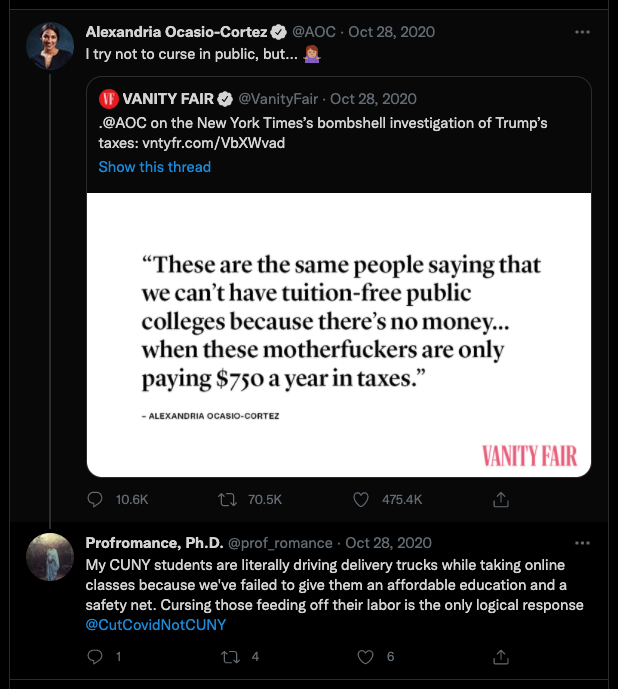 The CDLA #CutCOVIDNotCUNY collection hopes to act as a useful resource in the fight against austerity politics during the COVID-19 pandemic. Serving as a collection of responses native to the CUNY community, these experiences will therefore be preserved in the CDLA, to retain them in our collective institutional memory. This collection of the CDLA hopes to offer a preemptive measure against neoliberal master narratives through documenting the extensive pushback and activism by the CUNY community in this moment.

This collection is part of the CUNY Distance Learning Archive (CDLA), a group project developed as part of Matthew K. Gold’s Spring 2020 “Knowledge Infrastructures” seminar in the Ph.D. Program in English at The Graduate Center, CUNY, in partnership with The Interactive Technology and Pedagogy Certificate Program. All CDLA collections on the CUNY Digital History Archive website were co-curated by Travis Bartley, Nicole Cote, Zach Muhlbauer, and Stefano Morello (Project Manager).

Go to all 29 Items in collection.

This tweet, written in May 2020, by a CUNY adjunct lecturer, addressed the importance of funding CUNY given its key role as an "essential NYC infrastructure." This item is part of the City University of New York (CUNY) Distance [...]

This tweet from the CUNY Professional Staff Congress (the union of CUNY faculty, staff and graduate students) from May 2020, recognized U.S. Representative Alexandria Ocasio-Cortez's public support for funding CUNY, a perhaps too rare example [...]

Tweet: Infographic About Free CUNY (as it was up until 1976)

This tweet from May 2020 is an infographic, created by the CUNY activist group FreeCUNY, and tweeted out by a CUNY faculty member, depicted the history of CUNY's costs to students until the mid-1970s and the social and economic benefits New [...]

This September 2020 Teen Vogue article written by a CUNY Graduate Center PhD student in Anthropology about the CutCovidNotCUNY movement provides national acknowledgement in a widely circulated public facing magazine with a younger reader base to the [...]

This Twitter thread from the Professional Staff Congress documents the caravan to save jobs and fund CUNY; it includes images of protestors on foot, bike, and by car, signaling onlookers to take stock of the #SaveJobsFundCUNY, #CutCovidnotCUNY [...]

Go to all 29 Items in collection. 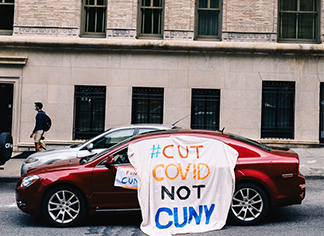