Conducted throughout 2014, the interviews in this collection are those of City University of New York (CUNY) students, staff and faculty. Interviewer and collection curator Douglas A. Medina, PhD candidate in the Political Science Program at The Graduate Center, CUNY, explores how a community, led primarily by student activists, came together to challenge the idea of merit and racial exclusion at CUNY. In the context of Medina’s research on the Open Admission program and the imposition of tuition at the university, the interviews unpack the relationship between race, class and the purpose of a public higher education.

Between 1969 and 1976 CUNY was a historical site of student and community activism. Inspired by post-Civil Rights era movements and ideologies—including Black Power, anti-imperialism, Marxism, and the New Left—students at many CUNY colleges were in the vanguard in the struggle for Blacks and Puerto Ricans to access a free, quality higher education.

In the context of shifting demographics in New York City and the need for an educated workforce due to a changing labor market, students at City College (the flagship CUNY college) organized, as a core group that came to be known as the Black and Puerto Rican Student Community (BPRSC). In several interviews, City College students, faculty, and staff discuss their struggle for gaining recognition, representation, respect and equality as embodied in their Five Demands:

The interviews about Open Admissions represent an array of perspectives from several CUNY colleges. Student, administrative staff and faculty voices highlight the complexity of the issues that arose.

The debates that shaped both Open Admissions and the imposition of tuition resonate today in conversations about The American Dream, merit, college affordability, and race and class politics. This collection represents a small but significant part of the quest to not only preserve the lessons of the past as told by individuals from the CUNY community, but also show the attempt to change the future trajectory of CUNY as a necessary public institution of higher education.

There are 7 items in this collection.

"Before Open Admissions there was a lot of the haves and the have-nots." – An Oral History Interview with Donal Farley

Following almost 10 years at the NYC Budget Bureau, Donal Farley began his employment at CUNY Central in 1967 as Assistant to the first Vice Chancellor for Campus Planning and Development Seymour Hyman. Under Chancellor Albert Bowker, he eventually [...]

This interview with Stuart Schaar, Professor Emeritus of Middle East History at Brooklyn College, was conducted by Douglas Medina for his research on Open Admissions at CUNY. Stuart Schaar was raised in the Bronx and attended the City College of [...]

Khadija DeLoache entered City College in the fall of 1966 with support from the CUNY Seek program. In this oral history, DeLoache discusses growing up in Harlem, her experience as a student activist, and the development of the Black Studies [...]

In this oral history, Anselma Rodriguez discusses her experiences as a student at Brooklyn College from 1969-1973. She was a founding a member of Movimiento Estudiantil Dominicanos and active in Brooklyn College's Puerto Rican Studies [...]

In this interview conducted about CUNY’s Open Admissions program, Arce describes his journey from the NYC Public School system to graduating from college. He credits his mother, who raised him alone in a Puerto Rican, immigrant community, for [...]

This oral history interview was conducted on April 4, 2014 at SUNY Albany. Allen Ballard grew up in Philadelphia, Pennsylvania and arrived at the City College of New York in 1960 as an assistant professor of Political Science. He was one of the [...]

Blanche Wiesen Cook, Eleanor Roosevelt biographer, grew up in the Bronx and Queens, and attended Hunter College as an undergraduate when it was an all female school. She treasured her time learning from Ruth Weintraub and Mina Rees, whom she [...]

Go to all 7 Items in collection. 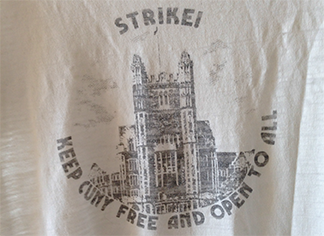