At City College (CCNY), the years of the Great Depression ushered in a student and faculty body as politically active as any since the school’s founding in 1847. With student activists embracing radical ideas, the college’s campus became a hotbed of protest and demonstration throughout the 1930s. William Randolph Hearst owned newspapers even derisively dubbed the college, "the little red schoolhouse." During the decade, CCNY’s grounds played host to anti-fascist rallies, peace protests, and anti-ROTC marches, all of which were held with seeming regularity and participation that frequently numbered in the thousands.

Student efforts, however, were often the source of conflict with the college administration, with CCNY President Frederick B. Robinson personally handling matters of student discipline. Apart from one student protest gone awry in which he hit protestors with his umbrella, Robinson typically saw to the suspension and expulsion of students and the shut down—if only temporary—of campus clubs and publications that he deemed sympathetic to their causes. The antagonism between the president and the students persisted throughout Robinson's tenure, 1927 to 1939, as he drew repeated criticism from opponents who labeled his actions as attempts to stifle free speech on campus.

Though students were often at odds with administration, they frequently found encouragement from younger faculty members, many of whom were CCNY graduates themselves and shared the same poor Jewish immigrant backgrounds as their students. However, radical political leanings of the instructors were tolerated even less by the administration than their students. When the Rapp-Coudert Committee convened in 1940 to weed out communists from the schools, more than fifty CCNY faculty and staff were fired. Dozens more testified in private and public hearings in what was a state-sanctioned anti-communist witch hunt that foreshadowed the larger federal efforts of the 1950s.

Curated by Carol Smith, a former associate professor at CCNY, most of the images are from the CCNY Archives, but some documents and images are located in the Tamiment Library, NYU; New York State Archives; Center for Marxist Studies; New York Historical Society, and the Schomberg Center for Research in Black Culture. This collection features fliers, photographs, artwork, and clippings that help to understand some of the key events that took place during a particularly contentious era at City College, the 1930s and early 1940s.

For additional resources on the topic, refer to Smith's online exhibition, CCNY's 'Antiwar Flier' collection as well as digitized student newspapers in 'The Campus Newspaper Archive'.

Go to all 60 Items in collection.

On this cover of the December 1933 edition of the National Student League's Student Review, CCNY President Robinson is depicted in full academic regalia as a cat, following in step behind a German military officer. Robinson's tail, [...]

The headline for this edition of Student News announces City College students' strike set for November 20, 1934. The strike was demanded the reinstatement of twenty-one expelled students as well as the removal of City College (CCNY) [...]

Articles on this front page of the April 1936 issue of City College's Teacher and Worker discuss a planned student "peace assembly" as well as preparations for faculty participation in the upcoming May Day Parade. This monthly campus [...]

Adopted at the American Student Union's (ASU) 1940 convention, this document lays out the group's main tenets, namely the belief that peace and progress must be found and cultivated at each of the nation's universities. The charter [...]

This photograph was taken at the November 20, 1934 rally at CCNY. The demonstration was held to demand the reinstatement of twenty-one expelled students as well as the removal of college president, Frederick B. Robinson. The twenty-one were expelled [...]

"Winter Soldiers - The Story of a Conspiracy Against the Schools"

Published in 1941 by the Committee for Defense of Public Education, a joint committee of the Teachers Union and the College Teachers Union, Winter Soldiers tells the story of the Rapp-Coudert hearings and New York State's efforts to rid its [...]

This is the subpoena that was issued to the College Teachers Union on January 27, 1941. Commanding the union's presence at a January 31st hearing before the Rapp-Coudert Committee, the document requests extensive union membership records, [...]

Go to all 60 Items in collection. 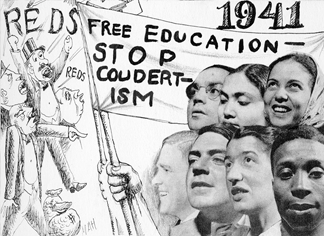