CUNY Coalition Against the Cuts, 1995

The CUNY Coalition Against the Cuts was a citywide coalition of CUNY student activists that reached its peak in spring 1995. The CUNY Coalition is best known for its “Shut the City Down” protest on March 23, 1995, when an estimated 25,000 young people packed City Hall Park. Many were beaten, pepper sprayed and arrested by Mayor Giuliani’s police force while attempting to march on Wall Street. Governor Pataki’s proposal for budget cuts and a tuition increase was modified shortly after the protest, and his plans to eliminate SEEK and College Discovery were scrapped.

This flier was used by activists to prepare for giving short presentations—"class raps"—in classrooms to promote the March 23, 1995 demonstration at City Hall. It includes details about the planned tuition hike and cuts to financial [...]

This special issue of Love and Rage, written and published by anarchist CUNY students active in the CUNY Coalition Against the Cuts, covers police repression of student activism at CUNY and police brutality in New York City neighborhoods. One [...]

Shut The City Down flier

Original flier used to publicize and invite CUNY and high school students to the March 23, 1995 rally at City Hall and the unpermitted march on Wall Street planned for after the rally. Included here is a separate document that was distributed among [...]

This black and white flier has a picture of Wynetka "Ann" Reynolds, chancellor of CUNY. Activists chose the chancellor as a target to draw attention to their struggle for access to CUNY and quality public education.

"Birth of a Movement" 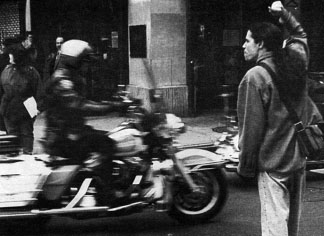