The state takeover of funding of CUNY’s four-year colleges (also referred to as "senior" colleges) and the first-time imposition of tuition on full-time CUNY students began in the 1976-77 academic year. In the next several years, it led to a sharp drop in the number of undergraduates enrolling across the CUNY system to a bit more than 180,000 (a loss of 62,000). Fifty percent fewer Black and Latino freshmen were among CUNY’s 1980 entering class as compared to 1977, with students of color increasingly shunted into CUNY’s community colleges. In 1975, 53 percent of entering freshmen had attended CUNY senior colleges; that figure dropped to 35 percent in 1976 and continued to decline for several years thereafter. Despite tuition support provided to needy students through the TAP and Pell programs and the continuation of remedial assistance offered by the College Discovery and SEEK programs, the bold Open Admissions experiment that had held such promise in the early 1970s was rapidly eroded. Promises to maintain these four assistance programs were betrayed and all faced cutbacks and shrinkage over the next decade as state and city budget cutting undermined the financial and remedial supports these programs provided to poor and working-class CUNY students.

The 1976 fiscal crisis also marked the end of CUNY’s ambitious building program that had begun 15 years earlier. The College of Staten Island, which opened in 1976, (a merger of Richmond College with Staten Island Community College), was the last new CUNY campus to be launched for the next four decades. And the CUNY Board of Trustees (BoT) (which replaced the longstanding Board of Higher Education in 1979) increasingly came to reflect the needs and interests of city and state business and political leaders in the dozen years after its creation. Following the 1976 fiscal crisis, CUNY served as one of the first public institutions to be repeatedly and savagely attacked by neoliberal forces intent on diminishing and even destroying public institutions.

Though CUNY students and faculty were not as active in the 1980s as they had been in the 1969-76 period in voicing opposition to repeated tuition increases and budget and program cutbacks imposed by the state and city governments and implemented by the Board of Trustees, they did undertake several important progressive actions. CUNY faculty and staff, working closely with city labor unions, helped launch a series of worker education programs and projects in the 1980s, including founding B.A. and M.A. degree programs for union workers based at City, Queens, and Brooklyn colleges, as well as the American Social History Project at the Graduate School and University Center, which developed multimedia curricula on labor history. Three of these programs are still active in CUNY more than three decades after their creation.

CUNY students also mobilized periodically in the 1980s and early 1990s to defend their interests and CUNY in general.  When Democratic governor Mario Cuomo and the CUNY Board of Trustees announced yet another $200 tuition increase in 1989, students mobilized across the CUNY system, launching a series of strikes and building occupations at 13 of CUNY’s 20 campuses. (See New York Times photograph of mass student rally and digital exhibition on the history of John Jay College.) CUNY students’ actions had garnered support not only from CUNY faculty but also from fellow SUNY students, who faced the same state-imposed tuition increase. Cuomo was finally forced to veto the CUNY/SUNY tuition increase in May, a clear victory for student militancy, albeit a temporary one, as it turned out. In 1991  Cuomo demanded a $53 million cut in CUNY’s operating budget, a $500 tuition increase, and sizeable cuts to the TAP program. SUNY faced similar cutbacks. Thousands of students and unionized workers rallied in Albany in March 1991 to oppose the governor’s proposed austerity plans. (Hear a graduate student speak about the takeover and his support for the fight agains budget cuts.) And though CUNY militants returned to their various CUNY campuses to organize strikes and building occupations over the next several months, they were not as successful as they had been two years earlier in getting the governor to back down on his proposed budget cuts or tuition increases. Cuomo and the trustees declared a policy of financial exigency across CUNY in 1992, which led to retrenchment (termination) of employees on a number of campuses.

Despite some promising efforts at broadening CUNY’s educational mission in the 1980s, led by faculty, staff, and students, the systematic attacks on CUNY as a progressive, democratic beacon of public higher education, which began with the fiscal crisis and the imposition of tuition in 1976-77, continued to worsen over the next 15 years.

This digital exhibition celebrates the 50th Anniversary of John Jay College of Criminal Justice. "From its evolution as a small school serving New York’s uniformed services, John Jay has grown to an internationally renowned liberal arts [...]

"Ready to Learn, Ready to Work"

This article from the CUNY Research Foundation's Annual Report of 1985 highlights the achievements of LaGuardia's programs for Deaf students.

This booklet, published in 1997, tells the story of the first 25 years of LaGuardia Community College, from its conception as "Community College Number Nine" in 1968 through its 1971 opening and beyond. The author describes the social and [...]

This November 1986 report details the activities of a training program for homeless mothers in New York City conducted by LaGuardia Community College's Division of Continuing Education. The program, which covered personal counselling, job [...]

CUNY students held strikes and building occupations in 1989 when Governor Mario Cuomo and the CUNY Board of Trustees announced yet another $200 tuition increase. This mass rally was held at Federal Hall, near Wall Street.

Oral History Interview with Members of The Newt Davidson Collective

Oral history interview with Sandy Watson, Joan Greenbaum, and Fern Khan of LaGuardia Community College. The interview was conducted on January 22, 2015 at the CUNY Graduate Center by Steve Brier and Andrea Ades Vásquez. The subjects discuss the [...]

In celebration of their 25th anniversary, the Professional Staff Congress/CUNY (PSC) published this collection of articles written by Irwin Yellowitz, "professor emeritus of history at City College and a former PSC treasurer." The articles [...] 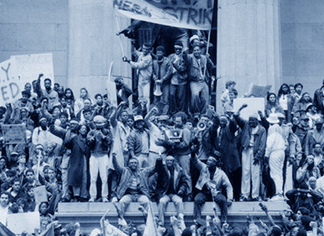