The municipal college system entered the 1960s hemmed in by old structures and organizational attitudes that impeded its potential growth. By decade’s end a new and larger system, the City University of New York, had been created to challenge these constraints. In large measure, this new structure emerged thanks to demographic and political pressures to expand higher education. Campus-based student activism, set within larger national and international struggles over the war in Vietnam and racial and gender inequality, provided the context for the expanding university.

The State University of New York (SUNY) expanded dramatically in the 1960s to handle the wave of baby boomers descending on its public higher education institutions. Financial limitations prevented the municipal college system from following suit. The governor and state legislature finally agreed in 1961 to aid the municipal system by combining the city’s four existing four-year colleges (City, Hunter, Brooklyn, and Queens), and three community colleges (Staten Island, Bronx, and Manhattan), under the aegis of a single entity, the City University of New York (CUNY). NY State would provide funding to expand the new entity, just as dozens of other states had in these years. However, state support was tied to a demand that CUNY impose tuition on all of its students—as Rockefeller had done at SUNY in 1962.

The 1962 long-range report for CUNY articulated three major goals: to build or acquire more community and four-year colleges; to expand enrollment by creating a more flexible admissions policy; and to maintain free tuition for full-time 4-year college students. It managed to realize all three of its goals, at least initially. In the early 1960s the state Board of Higher Education’s (BHE) had created two new community colleges in Manhattan and Brooklyn (Kingsborough) and acquired a third from the state (New York City Community College, in Brooklyn, which later became NYC College of Technology). But as late as 1964 CUNY’s totalundergraduate enrollment remained relatively small at only 49,000 students (SUNY’s enrollment, by comparison, had reached 138,000 by 1967). Chancellor Albert Bowker (appointed in 1963) understood the impending demographic changes facing the CUNY system, including the push by Black and Latino New Yorkers for increased access to public higher education. He therefore pressured the BHE to adopt an “open admissions” policy, guaranteeing a seat somewhere in CUNY for every NYC high school graduate, whose numbers began to grow dramatically after 1963. That policy, approved in 1966, was not projected to take effect until 1975. (Hear Vice Chancellor Edelstein's interview with Chancellor Bowker about the nature of the University.) BHE also agreed to build three additional CUNY community colleges — Brooklyn Community College #7 (which became the four-year Medgar Evers College), Bronx Community College, and LaGuardia Community College in Queens — to relieve overcrowding. (See, the Founding of Medgar Evers College collection and the history of LaGuardia Community College.) Three new four-year colleges in Manhattan, Staten Island, and Brooklyn, as well as a graduate school, were also authorized in the 1960s and CUNY repurposed two older four-year college branch campuses (Lehman in the Bronx and Baruch in Manhattan) to accommodate increased demand. The BHE assumed it had until 1975 to transform CUNY’s admissions policies, but it was, in fact, sailing toward a major confrontation between growing demand for higher education access and anger over racial and class inequalities on the one hand, and a deficient supply of instructors and campus facilities on the other. This confrontation would play out across the multi-campus CUNY system during the spring term in 1969.

The Fight for Open Admissions in 1969

Students of color across the CUNY system, inspired in part by the intensification of the civil rights struggle and urban unrest and by a wider embrace of Black Power, ethnic pride, and grassroots activism, mobilized during the spring 1969 term. They organized to defend and bolster both the modest toehold students of color had secured at CUNY as well as remedial programs such as SEEK that had been created to support minority student success. (See the literary magazine "SEEK Matters" and this collection of oral histories on the history of SEEK and Open Admissions at City College.) The ongoing resistance by New York State and New York City to allocate additional public monies to accommodate the needs of CUNY’s rapidly changing and growing student population created a growing gulf between the public’s demand for higher education and CUNY's restricted access.. In response to this crisis, early in the 1969 spring semester, African American and Puerto Rican students at the City College of New York (CCNY) demanded that the administration create special programs to meet the needs of Black and Puerto Rican students; bolster existing programs such as SEEK; and increase the number of Black and Puerto Rican students admitted. The Black and Puerto Rican students at CCNY were soon joined by fellow students, both those of color as well as white supporters, across the CUNY system.

A series of negotiations, mass rallies, and confrontations over several months culminated in student strikes and building occupations at CCNY, Brooklyn College, Queens College, and Borough of Manhattan Community College. New York City police were called in to retake occupied buildings by force; police occupied the CCNY and Brooklyn College campuses for several weeks in May. At Brooklyn 20 student protesters were arrested, facing serious felony charges (which were ultimately dropped). Boycotts of classes quickly followed, led by students of color, and supported by many white students and faculty members, disrupting the remainder of the spring term.

The entire CUNY system was under siege and its central administration as well as the city’s political leadership felt pressured to respond quickly to the students’ demands. Mayor John Lindsay and Chancellor Bowker announced their support for the protesters’ demands for increased access to CUNYand within two months, the BHE decided to accelerate its original timetable and implement the CUNY Open Admissions plan in the fall of 1970, five years ahead of schedule. All prior barriers and formal requirements for admission to CUNY were lifted, guaranteeing every NYC high school graduate a place in CUNY depending on their high school class ranking. The BHE’s decision also assured entering students access to remedial and other support services.

This policy shift remade the CUNY system overnight. The rapidity of the shift and the breadth of CUNY’s actions to open access were unprecedented steps in American higher education but ones that were also difficult to implement given CUNY’s lack of space, budget, and necessary faculty.  (Listen to panelists from the April 9, 2014 Saving CUNY's Past event.)

As the 1970s wore on, students and faculty at CUNY found themselves faced with an ominous environment. While the open admissions struggle of the late 1960s represented a signal achievement in the struggle to secure democratic access to quality [...]

This issue of Action features a "forum" of five CUNY faculty reflecting on the "turmoil" present on college campuses across the nation. The professors' contributions reflect several perspectives on student protest efforts and the larger issues [...]

Medgar Evers College - The Pursuit of a Community's Dream

In this short book, Medgar Evers College: The Pursuit of a Community's Dream, CUNY retired professors Florence Tager and Zala Highsmith-Taylor tell the story of the founding of the college. As an institution born largely out of 1960s [...]

Oral History Interview with Members of The Newt Davidson Collective

This oral history interview with retired Borough of Manhattan Community College professors Bill Friedheim and Jim Perlstein was conducted at the CUNY Graduate Center on June 1, 2015. Friedheim and Perlstein were intimately involved in many of the [...]

A Proposal for the Establishment of Community College Number Seven

This proposal for the founding of Community College Number Seven (later named Medgar Evers College) was put forward by the Board of Higher Education in November 1967. In this excerpt (pages 11-15), the Board establishes their desire to place a new [...]

Minutes of Proceedings, Board of Higher Education Meeting - March 25, 1968

As seen in these minutes of the March 25, 1968 meeting, the Board of Higher Education to expanded the responsibility of their presidential search committee for Community College No. Seven to include all matters related to the development and [...]

Memo from Al Vann: On Educational Needs and Services –The Bedford-Stuyvesant Coalition

This unaddressed memo is from Al Vann, Chairman of Steering Committee, and appears to be directed towards Frederick Burkhardt, Chairman of the Committee to Seek a President for Community College Seven (Medgar Evers College). Vann requests funds to [...]

Letter from Seymour Hyman, Vice Chancellor of Campus Planning & Development, to Ira Duncan, Deputy Commissioner of the Department of Real Estate, requesting temporary space in the Bedford Stuyvesant Community for the members to confer and [...] 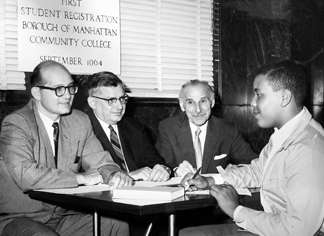