Radicalism at BMCC: The Early Years

After the Second World War, the City University undertook a program of dramatic expansion that included the opening of several community colleges that would expand access to higher education to heretofore unreached groups. In keeping with this imperative, the Borough of Manhattan Community College (BMCC) opened in 1964. Originally intended to prepare students to enter business school, this idea quickly succumbed to the power of events, as students by-and-large refused to enter business administration, favoring the liberal arts. Moreover, changes in the composition of the student body that would be dramatized in the 1969 struggle for open admissions had begun to affect BMCC by the latter part of the 1960s. Faculty found themselves confronted with new kinds of students—working-class students of color who not only demanded access to the city’s institutions of higher education, but also that those institutions reflect the struggles they faced as oppressed minorities within the city and the country at large. Soon BMCC was a hotbed of radicalism, as groups like the Third World Coalition, together with radical faculty members, sought dramatic changes in the structure of their institution and its relationship to the world outside.

This collection was curated by Bill Friedheim and Jim Perlstein who also saved and contributed the items. Jim was faculty advisor to the Third World Coalition and a participant in many of the struggles over curriculum, administration, and student participation in the running of the college. Bill Friedheim headed the college’s chapter of the United Federation of College Teachers (UFCT) and edited several radical publications that advocated alliances between students and radical faculty. Both were arrested along with dozens of students in the 1970 student strike and building takeovers, where students demanded an end to increases in tuition fees and a day care center for children of students, in addition to broader demands such as an end to US aggression in Southeast Asia.

Go to all 51 Items in collection.

This issue of Action features a "forum" of five CUNY faculty reflecting on the "turmoil" present on college campuses across the nation. The professors' contributions reflect several perspectives on student protest efforts and the larger issues [...]

The 1976 contract negotiations between the Professional Staff Congress (PSC) and the university occurred in the midst of the city's mid-1970s fiscal crisis. Radicals at Borough of Manhattan Community College (BMCC) formed a strike committee in [...]

Sample Pittman was an Associate Dean of Students at Borough of Manhattan Community College (BMCC) during the early 1970s. He became known to politicized students and faculty as a hostile opponent of the Third World Coalition, the radical group that [...]

This is an early newsletter from the Professional Staff Congress chapter at Borough of Manhattan Community College (BMCC). Dated February 24, 1974, the newsletter features an article attacking BMCC president Edgar Draper for using the school's [...]

This handbook, a precursor to today's "disorientation" guides, offered incoming students a view of life at BMCC from the perspective of radicals in organizations that included the New University Conference, Third World Coalition, Night Students [...]

This issue of Prometheus, BMCC's student newspaper, was the first published after the Third World Coalition assumed control of the student government; it leads with a story on the appointment of Edgar Draper as president of the [...]

This issue of the Tiger Paper explores the effects of financial aid reductions alongside CUNY's "Open Admission" policy, details class registration troubles at BMCC, and advocates for the boycott of "scab products."The Tiger Paper, which [...]

Prism was the Borough of Manhattan Community College's annual yearbook. This 35 page chapter from the 1971 edition details the student strike that, in May 1970, temporarily shut down the college and resulted in 58 arrests. Filled with photos, [...]

This oral history interview with retired Borough of Manhattan Community College professors Bill Friedheim and Jim Perlstein was conducted at the CUNY Graduate Center on June 1, 2015. Friedheim and Perlstein were intimately involved in many of the [...]

Go to all 51 Items in collection. 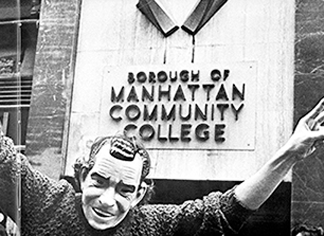