The Shutdown: CUNY Responds to the Covid-19 Pandemic

On December 31, 2019, the World Health Organization (WHO) learned from a media statement released by the Wuhan Municipal Health Commission that there had been cases of “viral pneumonia” in the People’s Republic of China. On February 11, the WHO provided an official name for the novel coronavirus responsible for the illness: COVID-19. In less than a month after its naming, COVID-19 developed worldwide into a full-blown pandemic. Seattle was the first hot spot, soon followed by New York City, which became a major epicenter for infection. Many public and private institutions were forced to close their doors and switch to remote operations, including the City University of New York. Over the course of a week, the largest urban public university in the United States, comprised of approximately 250,000 students and 45,000 faculty across 25 campuses, was asked to transition from the traditional practice of collegiate learning and university operation to a digital format that could be successfully operated from the confines of individual homes, all while a pandemic raged across the globe and the city, consuming health, livelihoods, and life itself.

For the user of the CDLA collection, these contrasting scales of time and consequence are understandably disquieting. Officially sanctioned notices from the CUNY administration reassuring the student body that “...there are no confirmed coronavirus cases involving anyone in the CUNY community,” can sound naive (if not cynical) in hindsight, especially when compounded by concurrent community petitions to close the college and the circulation of the #CloseCUNY “hashtag” across social media outlets. Yet, the closing of a university is complex; in its role as a public institution, the CUNY system overwhelmingly serves the classically marginalized citizens of New York City, many of whom could not be assumed to possess the necessary equipment to engage in online instruction. 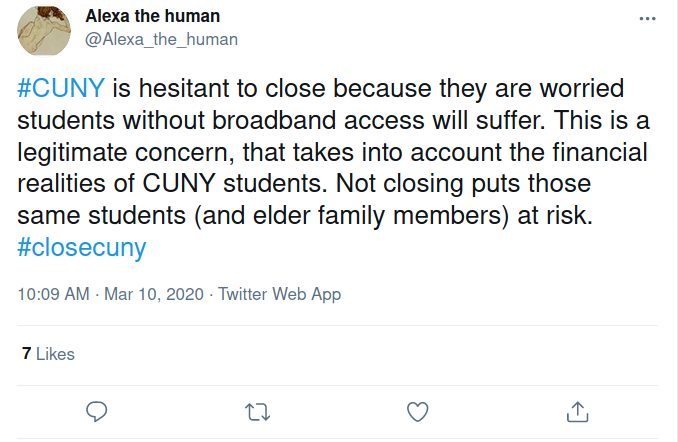 As a CUNY student’s tweet pointed out, closure of the university could not proceed without considering the double-bind of educational access and lived precarity that intersects the lives of those reliant upon public institutions. Such reasoning can be seen expressed in the official communiques of CUNY authorities, such as this series of tweets from the president of Lehman College. To close CUNY was more than simply a physical “closing of doors”; it was the denial of infrastructural access to the most vulnerable and deserving students, faculty, and staff. While possessing a duty to protect the health of its community, CUNY needed to proceed in a manner that respected its core mission to provide access to quality higher education for all.

Of course, to simply reiterate the official account of the digital transition does a disservice of forgetting those very voices that such accounts claim to value. While the university pondered solutions to structural inequity, the CUNY community was awash in uncertainty and consequential anxiety. Some doubted the sincerity of official statements, and saw a perceived lack of investment in preventative infrastructure as demonstrative of a lack of care. For some students, faculty and staff, this developed into feelings of antagonism towards CUNY as a whole. Given such an outcry and the growing rate of infections across New York state and the nation, a CUNY shut-down seemed bound to occur. Yet, even if one were acutely aware of the exact timing of the closure, they would still have been stunned by the means of its announcement. On March 11, 2020, at 11:12 AM, New York Governor Andrew Cuomo surprised the CUNY community by announcing on Twitter that CUNY would be moving to online learning within a week. 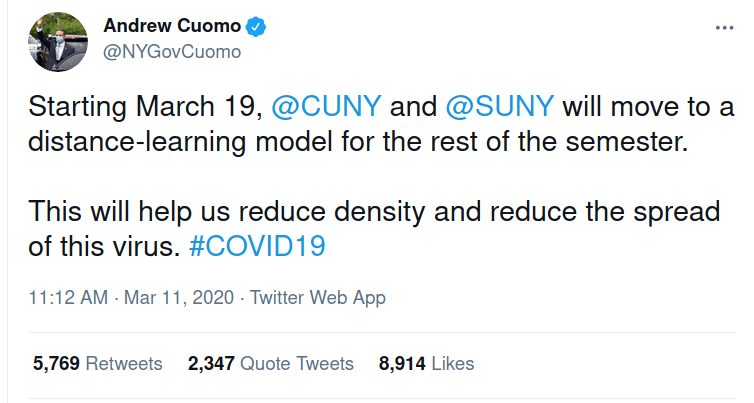 Starting March 12, CUNY would enter a five-day recess before transitioning to fully remote instruction for the remainder of the semester. In terms of public safety, such a decision could be deemed necessary: John Jay announced that same day that a COVID-19 exposure (defined by the CDC as being in close contact, within 6 feet for a total of 15 minutes or more, with a person who has tested positive for COVID-19) had occurred, and Brooklyn, Lehman, and Staten Island colleges announced exposures within the same week. But in terms of logistics, the sudden decision exacerbated further anxieties, as both students and faculty scrambled to cope with the limitations facing the integration of face-to-face coursework into digital formats. Perhaps the most succinct example of the indeterminacy facing instruction was a Queens College department email providing blanket approval to all course changes, due to inability of the administration to keep up with requests.

With such strains facing academic continuity within the first few weeks of the online transition, CUNY administration deemed another period of recalibration appropriate, suspending instruction from March 27 to April 1. Though coming at the expense of the traditional Spring Recess period, the extra time proved valuable for faculty, allowing for the restructuring and fine-tuning of teaching practices and syllabi. Though these new course designs hardly proved immune from problems (see the accompanying Teaching and Learning collection of this archive), they at least provided time for a new reality to set in: distance learning had begun.

Large questions abound: Were the difficulties in transitioning to online learning a result of Governor Cuomo’s lack of communication or CUNY’s administrative lack of power under the Cuomo administration to determine its own fate? Are the anxieties and antagonism of the CUNY community deserved or the knee-jerk reactions of a community in crisis? In the Shutdown collection of the CUNY Distance Learning Archive, we refrain from answering these questions. Rather, this collection seeks to preserve a moment, acquiring artifacts from CUNY staff, students, and faculty in order to reveal the range of subjective moments of crisis.

This collection is part of the CUNY Distance Learning Archive (CDLA), a group project developed as part of Matthew K. Gold’s Spring 2020 “Knowledge Infrastructures” seminar in the Ph.D. Program in English at The Graduate Center, CUNY, in partnership with The Interactive Technology and Pedagogy Certificate Program. All CDLA collections on the CUNY Digital History Archive website were co-curated by Travis Bartley, Nicole Cote, Zach Muhlbauer, and Stefano Morello (Project Manager).

Go to all 32 Items in collection.

This tweet pointed out that the #CloseCUNY hashtag had received national circulation among Twitter's userbase during the early days of the pandemic. This hashtag expressed a growing desire for CUNY to cease in-person instruction, begun early in [...]

Posted on March 10, 2020, this tweet represented the official announcement from the City University of New York (CUNY) administration regarding the exposure of John Jay's student body to COVID-19. While many other tweets in this collection show [...]

The City University of New York (CUNY) traditionally has sent out regular newsletters to inform its community of significant events and accomplishments by its faculty and students. For the first week of remote learning, these newsletters would focus [...]

Safety Measures at The Graduate Center

Taken by Charles Scott, Director of Facilities at the CUNY Graduate Center between March 2020 and May 2021, these pictures showed some of the ways in which administration and staff worked towards creating the conditions for a safe working and [...]

Go to all 32 Items in collection. 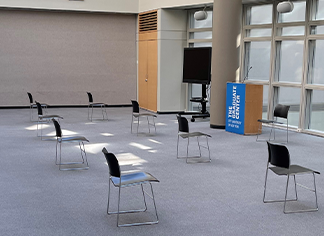