The Fight for Asian American Studies at Hunter College

In 1989, students brought the annual East Coast Asian American Student Union (ECAASU) conference to Hunter while then assistant provost and professor of education Dr. Shirley Hune did the same with the annual Association for Asian American Studies (AAAS) conference. Not only was this the first AAAS conference held on the East Coast, thereby giving the association and the field national representation and reach, but these concurrent conferences also demonstrated to the Hunter community the broader interest in Asian American studies. CUNY-wide protests against tuition hikes imposed in 1989 acted as a platform on which Hunter students built their demands for an Asian American studies program.

The AASP was established in 1993, with Dr. Peter Kwong as its inaugural director. In a letter to the Community Advisory Board for the new program, Kwong wrote, “Mindful of its debts to the community, the program intends to serve it.” As items from the collection show, many of the AASP’s early projects and programming were dedicated to amplifying Asian American artists and writers, women’s and feminist issues, and issues of labor and migration.

The history of the AASP also reveals that institutional investment in and commitment to ethnic studies were never a given at Hunter or CUNY as a whole, but rather had to be fought for and defended at every turn. In 1995, a group of CUNY Asian American scholars assembled an Asian American Studies Guidebook for CUNY which detailed key challenges and suggestions for the implementation of Asian American studies across the CUNY system. This guidebook represents a case of prescient planning by this scholarly community which manifested in strides made when the efforts of Dr. Kwong and, later, Dr. Robert Ku, at Hunter aligned with those of Dr. John Kuo Wei (Jack) Tchen (director of the Asian/American Center at Queens College before going on to establish Asian American studies at NYU), and Dr. Gary Okihiro (founding director of the Asian American Studies Program at Columbia University). However, despite these linked efforts, Asian American studies did not grow to become institutionalized at other CUNY campuses. Furthermore, by 2006, the Hunter AASP had lost its one full-time faculty person, Dr. Ku, and had become effectively defunct.

Eight students came together to form CRAASH when Hunter student Olivia Lin discovered that the program could not offer her a minor because it had no director to formally do so. In response to the freeze on the AAS minor as well as the program’s lack of full-time faculty, budget, space, course offerings, and other resources, CRAASH began organizing students in the Fall of 2007 to advocate for increased funding, the allocation of full-time professors for the program, and the expansion of course offerings. Many of CRAASH’s strategies are documented in this collection—including articles that resulted from its media outreach strategy, the 2008 “Strengthening Education: Empowering Asian American Studies” conference they organized, and their petition which collected over 1,000 signatures.

Within one year, CRAASH’s organizing resulted in the hiring of poet and translator Jennifer Hayashida as, first, coordinator and, later, director of the AASP. Hayashida grew the program over the next several years—developing course offerings, increasing the number of AASP minors and student engagement with the program, and bringing in gifts and grants such as an NEH summer seminar for K-12 educators. However, structurally, little had changed and the program still lacked any full-time faculty other than Hayashida.

In 2016, CRAASH launched a campaign demanding an Asian American Studies Department and major, which would have required the college to invest in five full-time faculty lines and provide necessary administrative resources to support a newly formed department. CRAASH presented its demands at a Hunter Faculty Senate meeting in September of 2016, during which the Hunter administration under President Jennifer J. Raab also announced its plans to move the AASP administratively out of the School of Arts and Sciences and into the Provost’s office. Hayashida was notified that she would not be reappointed as a Distinguished Lecturer, leaving the program with an uncertain future. The news of Hayashida’s non-reappointment came one day after she had secured a $1.7 million federal grant for Asian American Native American Pacific Islander Serving Institutions (AANAPISI) for the program, in what is a striking metaphor for the relationship between the program and the Hunter administration. CRAASH organized and successfully resisted these plans to restructure the program. The program is currently under the direction of Dr. Vivian Louie, Professor of Urban Policy and Planning. As the past has shown, the future of the program will surely depend upon administrative investment, sustained interest and commitment to the radical roots and spirit of ethnic studies, and innovation in making it work when the administration inevitably fails to deliver.

Go to all 26 Items in collection.

In this letter dated October 13, 1993, inaugural director Peter Kwong announces the formal establishment of the Hunter Asian American Studies Program (AASP)—one of the first programs in Asian American studies on the East Coast. The letter invites [...]

Guidebook for the Implementation of Asian American Studies at CUNY

This program is for a panel event titled "Asian American Women and Feminism," which took place on March 6, 1997. The event was sponsored by the Hunter Asian American Studies Program and the Asian Pacific American Student Association. The [...]

Where Are We Now in the #Fight4AAS?

In this Google Hangout, which took place on May 9, 2016, student activists from across the country discuss their respective experiences organizing for Asian American studies on their campuses. The conversation was hosted by 18Million Rising and [...]

This is the first issue of LOTUS, a student-run publication devoted to Asian/Asian American perspectives at Hunter College, which came out in the Spring of 1988. The issue includes fiction, non-fiction, poetry, photography, and reflections on the [...]

Go to all 26 Items in collection. 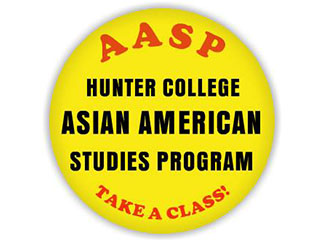