Compiled from the holdings of CUNY professor emerita Sandi Cooper, this collection features broadcast clips from the late-1990s and early-2000s that focus on battles between city and state officials, university trustees, students, labor unions, and activist faculty over the direction of the university heading into the 21st century. Topics of discussion that frequently appear in the videos include open admissions and entrance standards, graduation rates, budget cuts, remediation, and reform.

These subjects were of central concern to the university's advocates during the 1990s as the decade saw CUNY face attacks on multiple fronts. At the state level, devastating budget cuts contributed to fewer courses and tuition increases. And on the city level, as many of these videos attest, CUNY faced continued pressure from Mayor Rudolph Giuliani to bend to his conservative ideological vision for the university. Though responsible for only a smaller portion of CUNY's overall budget, Giuliani's appointees to the Board of Trustees were no less damaging to the university and its mission of serving all of New York's diverse student population. A 1999 report released at the direction of the Mayor labeled CUNY as "an Institution Adrift" and took aim at both the university's Open Admissions system and its remedial programs for entering freshmen. The same year, Giuliani and his appointees were able to do away with CUNY's remediation programs and move toward the centralized control of CUNY that would become standard in the 2000s.

These materials were shared with the archive following an oral history interview conducted with Cooper in 2018. That interview, also included in this collection, covers the breadth of Cooper's career through which the professor emerita reflects on her six decade-long involvement with the university, its students, and the faculty senate. Cooper, whose research specialty focuses on peace studies, spent the majority of her academic career at the College of Staten Island.

Go to all 11 Items in collection.

In this 2018 interview Sandi Cooper, history professor emerita, reflects on her six decade-long involvement with the university, its students, and the faculty senate. Cooper, whose research specialty focuses on peace studies, spent the majority of [...]

Featuring Herman Badillo, John Clandra, Sandi Cooper, and Dennis Walcott, this episode of NY1's "Inside City Hall" tackles the topic of remedial education at CUNY. It was originally broadcast on March 23, 1998. The topic received [...]

Airing on May 6, 1998, this episode of CUNY Forum features an hour-long discussion on the future of public higher education in New York City. Moderated by Brooklyn College Professor Ed Rogowsky, the forum includes several participants including [...]

Go to all 11 Items in collection. 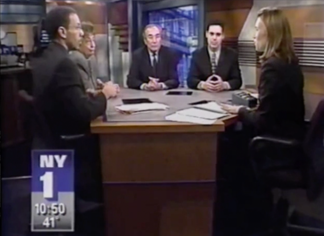