The "Occupy CUNY" collection chronicles a major period of organizing and mobilizing by CUNY Graduate Center (GC) students during and after Occupy Wall Street (OWS). The collection includes primary materials such as flyers, posters, curriculum, video and websites. In collaboration with undergraduates, tenured and adjunct faculty, staff, and community organizations, GC students boomeranged the call to occupy back into the university to both reclaim and transform it.

Students, faculty and staff confronted rising tuition costs, education debt, campus surveillance, and police violence, as they related to a larger movement against social inequalities that swept New York City, the United States, and much of the world. In the process, they created guerrilla arts, graphic design, protest preparedness checklists, street journalism, and “pop-up” educational events and theater performances.

Several students from the Graduate Center and other CUNY colleges helped develop OWS infrastructure over the summer before the occupation of Zuccotti Park on September 17, 2011. Soon after, they circulated public writings based on past struggles on how to fortify the occupation’s grounds and bridge anti-capitalist critiques with demands for gender, race, and sexual liberation. Throughout fall 2011, because GC students teach at many CUNY colleges, they were strategically positioned to organize weekly “General Assemblies” (GAs), and then to fan out across the CUNY system to share plans, perspectives, and resources in their classrooms and departments, as well as around the city in neighborhood assemblies and organizations.

Curated by Conor Tomás Reed, items in the “Occupy CUNY” collection document pivotal OWS-inspired events that occurred on and off CUNY campuses. An info-graphic and curriculum was designed and circulated for the October 15, 2011, “Occupy CUNY Teach-In” at Washington Square Park. In the wake of the NYPD eviction of protesters in Zuccotti Park, CUNY students and faculty mobilized for the November 2011 Week of Action, including the November 17 city-wide Student Strike. Collection items also cover the November 21, 2011, CUNY Board of Trustees public hearing at Baruch College when CUNY security and NYPD attacked a crowd that was peacefully trying to enter to testify against a 5-year annual tuition increase. Occupy CUNY News was launched to document the aftermath of this two-pronged attack by NYC and CUNY elites upon the Zuccotti Park occupation and campus dissent for educational access.

In Spring 2012, after the CUNY administration hired the “risk solutions” firm Kroll, Inc. to write a report on the November 2011 Baruch incident, GC students launched a campaign to discredit the biased report and expose the new collusion between CUNY and private security. Collection items display Fake OKCupid (online dating) pages that were produced to mock CUNY Chancellor Goldstein and a Kroll monster with wedding invitations, and even a wedding ceremony on May 1, 2012. The Kroll report’s legitimacy was threatened well before it appeared in January 2013. May 1 was also the inaugural date for the Free University of New York City, a free radical outdoor educational event that featured over forty workshops and two thousand participants, and which has since created over two-dozen similar events around the city.

Graduate Center and CUNY organizing has flowed into many tributaries of struggle since then both on and off campuses: Black Lives Matter and police/prison abolition, women’s and LGBTQ liberation campaigns, natural disaster recovery and environmental justice, opposing the militarization of CUNY, expanding ethnic studies and radical pedagogies, demanding full free tuition, adjunct teachers’ pay equity, and beyond. This flashpoint of the CUNY movement deserves to be studied, remixed, and enacted anew. Learn more at this supplementary website, which has further materials about the collection and period.

Go to all 38 Items in collection.

Occupy CUNY circulated this informational leaflet for a “Student Week of Actions” (November 14-21, 2011) in defense of education, and in solidarity with Occupy Wall Street. The schedule of Graduate Center Events included a student strike, a [...]

Satirical leaflets made by Occupy CUNY about Chancellor Matthew Goldstein's relationship to Kroll, Inc., a security advising company that CUNY hired to conduct a biased investigatory report about a November 21, 2011 incident at Baruch College. [...]

This satirical menu featured dishes called “democratic” university, “meaningful” academic employment, “right to peaceful protests” and “safe and secure” learning places and was part of a pop-up political theater action created by the [...]

This flyer announces a radical-teach by CUNY Graduate Center students on October 21, 2011, in Washington Square Park. An offshoot of the Occupy Wall Street movement, Occupy CUNY organized around fighting the militarization of CUNY campuses, and [...]

This mock New York Times announcement between Chancellor Goldstein and Kroll Security Group announces a protest in the form of a satirical wedding procession and ceremony, which was to be held on May 1st, 2012. In addition, the announcement [...]

This Wordpress site features a collection of links and articles relating to the Occupy CUNY movement of 2011-12. No longer updated, it now serves as a repository for information on the activism of the period.

The Time for Action

This 8-minute film includes footage from the second General Assembly at Hunter College, and the first "Occupy CUNY" teach-in at Washington Square Park on October 21st, 2011. The filmmakers who were CUNY graduate students at the time [...]

Go to all 38 Items in collection. 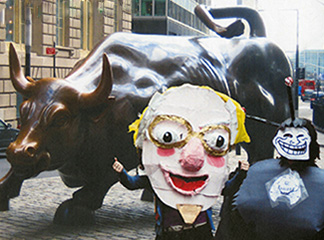