This collection focuses on the formative years of the Professional Staff Congress/CUNY from the 1960s until 1974.  Falling into several distinct periods, it covers:

At the time of the formation of the PSC/CUNY, union representation for professionals in higher education was not limited to CUNY. New York State's Taylor Law of 1967 authorized collective bargaining for public employees and faculty and staff at the State University of New York, as well as at local community colleges, also moved to union representation. Organizing was not limited to the public sector as unions formed in private colleges under the rules of the National Labor Relations Board. Faculty and staff rejected the argument that all academic employees were professionals and thus should not join unions, which were designed for blue collar workers; and that collegiality and shared academic governance provided faculty with a voice in decision making, thus making a union unnecessary. The formation of the PSC was based on an understanding that the subjects covered by the contract required a legal, enforceable instrument, negotiated directly between a union and an administration. The governance system would remain, and would still function for academic issues.
This collection was curated by Irwin Yellowitz, a member of the PSC Executive Council from 1973 to 1997 and treasurer from 1984 to 1997.

Go to all 47 Items in collection.

In celebration of their 25th anniversary, the Professional Staff Congress/CUNY (PSC) published this collection of articles written by Irwin Yellowitz, "professor emeritus of history at City College and a former PSC treasurer." The articles [...]

This oral history interview was conducted by Bill Friedheim on November 5, 2014 at the offices of the Professional Staff Congress (PSC). Irwin Yellowitz discusses his experience as a professor of history at City College of New York, events [...]

In this item, the Legislative Conference (LC) voices disapproval of the ongoing efforts by the rival United Federation of College Teachers (UFCT) to replace the two bargaining units and two contracts that resulted from the collective bargaining [...]

"Sign the Petition for a New Collective Bargaining Election"

In this open letter from April 1971, Israel Kugler, president of the United Federation of College Teachers (UFCT), first outlines some of the serious problems facing his union and CUNY. He then calls for a new collective bargaining election, with [...]

This is the full text of the merger agreement between the Legislative Conference (LC) and the United Federation of College Teachers (UFCT). The agreement was approved by the governing board of each organization, and then by the membership of each [...]

This October 1972 mass meeting at the Marc Ballroom at Union Square, New York came at a time when the Professional Staff Congress (PSC) was deadlocked with CUNY administration during negotiations for the union's first contract following its [...]

This lengthy document lays out the terms of the merger between the New York State Teachers Association (NYSTA) and the United Teachers of New York (UTNY) set to take place on April 4, 1972. Previously the NYSTA had been affiliated with the National [...]

This press release from the Professional Staff Congress (PSC) announces the recent vote from CUNY faculty and staff in favor of a single bargaining unit instead of the three preferred by CUNY administration. Overwhelmingly in favor of single [...]

This photograph shows the first meeting of the newly formed Professional Staff Congress (PSC) contract negotiating committee with CUNY administration. Negotiations were difficult and an agreement was not reached until July 1973. Pictured here [...]

Go to all 47 Items in collection. 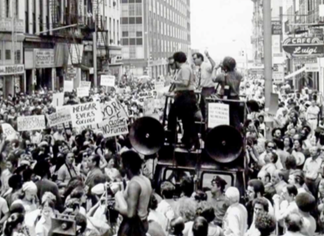