The Founding of Medgar Evers College

In February 1968, the City University of New York announced plans for the creation of an “experimental” community-based college that would be located in central Brooklyn. Later named Medgar Evers College, the school was to be the first CUNY campus located in, and focused on, an underserved city neighborhood. Within days of the announcement, community leaders from several organizations began a months-long struggle with CUNY administrators to play a crucial role in determining the mission and development of the college. Over time, their efforts won the community equal representation on a committee tasked with selecting a president and, with persistence and organization, the neighborhood’s influence expanded to other areas, including building selection, hiring, and curriculum. Perhaps most impressively, it was only with the community’s insistence that Medgar Evers College became a four-year college instead of CUNY’s initially proposed two-year institution.

The extensive influence of the community during this period represents a key moment in the history of Open Admissions at CUNY. Simultaneously, another local struggle over "community control" was occurring between the United Federation of Teachers and Brooklyn's Oceanhill-Brownsville community along with national upheaval over the Vietnam War and other social justice issues. These local and national events provide the context for, and greatly influenced, the events that unfolded at Medgar Evers College.

Comprised largely of correspondence between Bedford-Stuyvesant representatives and CUNY officials this collection, curated by Florence Tager, contains everything from official documents, meeting minutes, and telegrams, to internal CUNY memos, handwritten notes, and images, all relating to the struggle over the formation of the college.

For more on subsequent events and struggles around Medgar Evers College, see this item in the collection, a short book on the history of the college: Medgar Evers College: The Pursuit of a Community's Dream, by retired CUNY professors Florence Tager and Zala Highsmith-Taylor.

Go to all 36 Items in collection.

Medgar Evers College - The Pursuit of a Community's Dream

In this short book, Medgar Evers College: The Pursuit of a Community's Dream, CUNY retired professors Florence Tager and Zala Highsmith-Taylor tell the story of the founding of the college. As an institution born largely out of 1960s [...]

A Proposal for the Establishment of Community College Number Seven

This proposal for the founding of Community College Number Seven (later named Medgar Evers College) was put forward by the Board of Higher Education in November 1967. In this excerpt (pages 11-15), the Board establishes their desire to place a new [...]

Minutes of Proceedings, Board of Higher Education Meeting - March 25, 1968

As seen in these minutes of the March 25, 1968 meeting, the Board of Higher Education to expanded the responsibility of their presidential search committee for Community College No. Seven to include all matters related to the development and [...]

Memo from Al Vann: On Educational Needs and Services –The Bedford-Stuyvesant Coalition

This unaddressed memo is from Al Vann, Chairman of Steering Committee, and appears to be directed towards Frederick Burkhardt, Chairman of the Committee to Seek a President for Community College Seven (Medgar Evers College). Vann requests funds to [...]

Letter from Seymour Hyman, Vice Chancellor of Campus Planning & Development, to Ira Duncan, Deputy Commissioner of the Department of Real Estate, requesting temporary space in the Bedford Stuyvesant Community for the members to confer and [...]

Telegram from Al Vann: Promising Action if Services and Personnel are Withdrawn

This telegram was sent from Al Vann to CUNY Chancellor Albert Bowker. Vann, Chairman of the Steering Committee of the Bedford-Stuyvesant Coalition. Vann writes the message on behalf of the Coalition's member organizations in an effort to [...]

Community's Criteria for the President of Community College No. 7

Created by the Bedford-Stuyvesant community, this paper outlines their criteria for the president of Community College No. 7 (later named Medgar Evers College). Including experience, physical appearance, philosophy and personal background, among the [...]

Go to all 36 Items in collection. 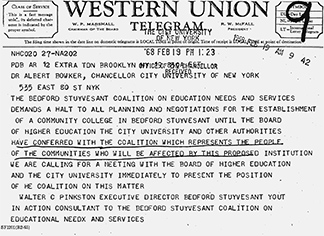